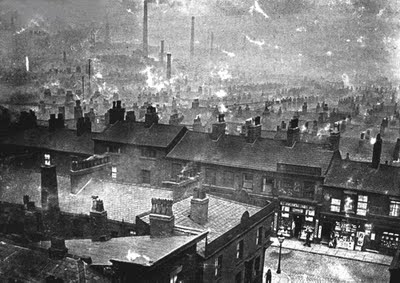 The population of Manchester in 1773 was only 22,481, but with the removal of legislation allowing for an exponential growth in cotton imports, this number was to rise drastically.

The introduction of large factory mills as well as Crompton’s Mule machines in any other available spaces created jobs that were largely filled by immigrants, but housing was climbing at a much slower rate than jobs. Mills started becoming electric in 1785, further increasing the output of cotton, and as a result additional industries appeared in Manchester to cater to the ever-growing cotton industry.

The installation of these resources encouraged the exploitation of Manchester’s coalfields to the west and as a result, created opportunities for employment for those seeking work. As coal production became more and more expedited due to accelerated industrialization, it became the driving fuel of almost every industry operating within Manchester and made the city a center for materials production, especially in regards to the textile industry.

These expansions in the Manchester economy meant that in 15 years the population had almost doubled to 42,821. Housing was at a premium, with multiple families commonly living under the same roof. Health and hygiene became a serious problem. Mills and factories ran on coal, creating black clouds of soot that covered the city and even towns nearby. It was exacerbated however in the working class, fevers and cholera swept through cramped, overcrowded living quarters, streets were covered in excrement from horses, and they worked long hours with poor nutrition.

Manchester’s economy hinged on its main industry, and so when supplies became scarce, many of its occupants could only eat by way of soup kitchens. The water supply was always insufficient, so they resorted to collecting rainwater in lead cisterns and using that for cooking and cleaning. These conditions sparked the beginning of the workers rights movement in Manchester, but they didn’t slow its growth: by 1823, its population reached 108,000 people.